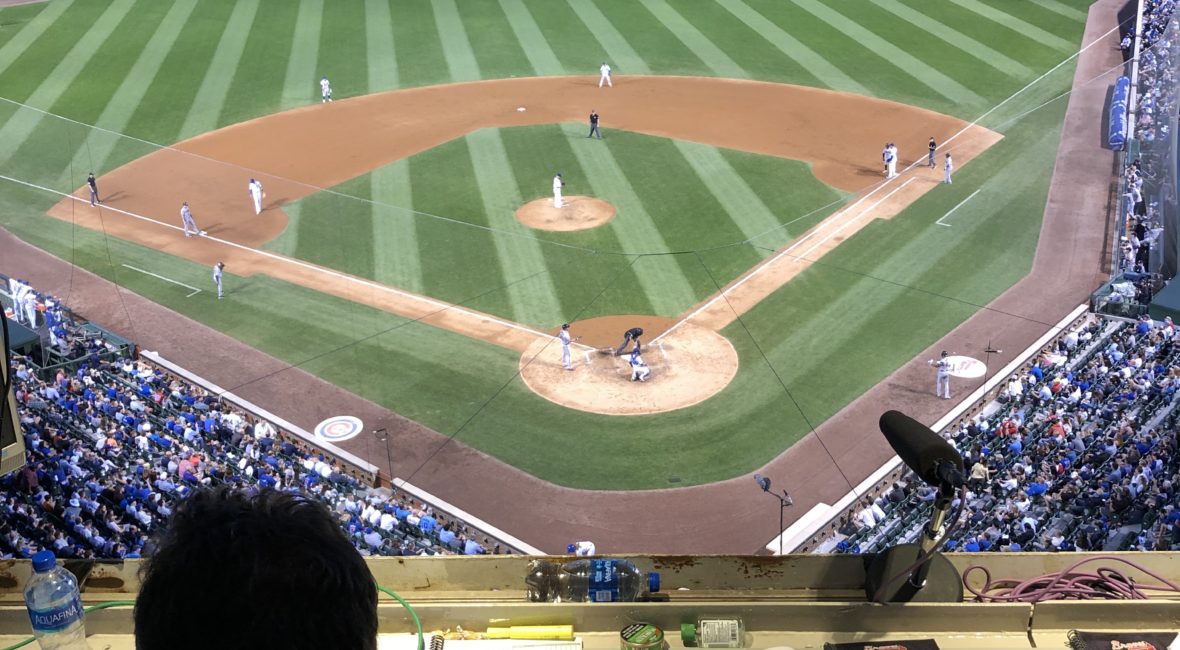 You are never, ever done growing. You’re never finished learning. If you’re lucky.

You’ve been on or near the air in Chicago since fall 1994, when a long haired singer in a 10 piece funk band was given the opportunity to intern at Sportsradio 820. This came on the heels of 4 broadcasting-filled years in college, followed by a 2 year sabbatical to fritter about in pursuit of rock stardom.

Since that internship, when you showed up so often in wildly tattered ripped black jeans, you’ve become more professional, more comfortable, and have gotten closer and closer to the games. Decades later, the Score carried the White Sox for 5 years after you’d risen to midday host. A season-long all access pass teaches you the secret lesson on how to be comfortable at the ballpark: it’s the people, stupid.

Genuinely noticing and interacting with the parking lot guys, the elevator attendants, the PR folks, or the soundmen in the back of the radio booth….this is the stuff that cements your sense of place. You’re on the clock daily there, everyone, and it’s a unique process of assimilation. You’ve all learned how the sausage is made, via varying personal timelines. You have to balance your irrepressible excitement of WORKING AT A BASEBALL GAME with acknowledging glances that indicate the banality of professional repetition. The trick is to outwardly portray that it’s not overwhelming to be there, while protecting the inner gratitude and truth of just how damn lucky you are.

And over the years you share some of that with people who get it. You talk baseball, kids, rock and roll, life. You finally feel mostly at home in ballparks on both sides of a 2 team town. It’s a dream you don’t want to end.

In 2016, you infiltrated baseball life as insidiously as a talk radio guy could; covering 4 of the World Series games as media, including Game 7 in Cleveland. Crazily, you ended up watching the celebration over the shoulders of Pat Hughes and Ron Coomer in the flagship station’s booth.

The moment, over the shoulders.

You hosted midday coverage of the Cubs parade, culminating with an open air broadcast perch between the masses and the podium. Insane.

“What if this is as good as it gets?” You figured it was. Especially when, less than 2 years later, professional humbling came at the hands of a newly re-crowned executive-king, determined to reshuffle an already winning hand now that the table was his. It’s his card game, you accepted, though the bitterness lingered and threatened to cripple.

But don’t use the wheelchair just because it has become available. You saw others quit, and that will not be you. You have to keep grinding, like a slugging corner outfielder who suddenly finds himself Designated For Assignment. It was clearly time to grab a first baseman’s mitt, and see if you could play there, or even DH.

This brings us present, and finds me offered a few days of doing pregame and postgame for the Cubs radio network. Thanks, Mitch Rosen.

And thank you, Zach Zaidman. Zach is an absolute gem of a radio teammate, and always has been, withstanding abuse as a Bears guest on snarky shows while never losing his cool. Now, he’s been tasked with highly structured pre/post for Hughes and Coomer, and playing foil/producer/backup/appreciative chorus during 162 baseball games. He does it with passion, curiosity, and humility. He has enhanced a really good radio team, and along with engineer Dave Miska fills the room with genuinely warm, excellent people.

Zach has been supportive of Spiegelian inclusion, conceptually, and has patiently guided the newbie’s education while simultaneously stepping up to fill the full time play by play shoes of an absolute legend. He has made it sound easy, when it is most definitely not, and still frequently turned around to make sure I was doing okay. Class.

And thank you, Ron Coomer. “You need anything in the locker room, you let me know,” said the long time big leaguer who has a daily audience with the manager. I’ve been around the players and the clubhouse plenty, so I’m good, but knowing he had my back if anything got weird was beautiful. And when it came time for Coom and I to interact with his “Keys To The Game,” or the occasional mid-inning banter, he was attentive and encouraging.

Oh by the way, he’s brilliant. What he deduces from a baseball game from above is waaaay more than he sometimes chooses to share and describe. That self-editing is usually done for the quality of the broadcast, so as to not overwhelm the listener, and so as to not distract the flow of the mellifluous Hughes. But I have gotten much smarter between innings.

Back to you. The first time you did pregame; there were serious nerves. You receive those butterflies like a challenging, non-threatening reacquaintance; this is not the occasional performance anxiety hosting a talk show solo can bring. This is the exhilaration of the new. Get the sponsorships in. Fill the gaps with facts and numbers, harder core baseball content than normal conversation. Somehow, eventually, put your own personality and entertainment in the shows, but slow down…just complete the task as instructed for the moment.

Don’t miss the national anthem. Do the legal ID. Give the producer clean in-cues for the pre-produced pieces. Hit all your commercial break out-cues cleanly. Don’t curse or say anything offensive that will mark the end of your career. Be interesting. Overall, try and sound like the audio equivalent of what you learned to physically represent all those years ago at the ballpark: comfortable assurance that does not negate the absurd joy of being there.

Because here’s the thing: any of us who got into the sports media business, along with the millions who thought about it but went another way, got hooked on the idea because of the Games. The Games are the thing, around which have sprung sports sections, talk shows, blogs, podcasts, Twitter, and the rest of it. Most of us have worked for the Remora fish while the Great White shark hunts and eats. The Game, man, this new job has brought you into the Game.

You finally made it to the show. You can attest to have seen no fungus on anyone’s shower shoes. Yes Crash, they hit white baseballs for batting practice, and the ballpark is like a cathedral.

Postgame is a unique animal. You’ve fully embraced and experienced the laconic pace of a 3 hour ballgame. Then, bam. With the insane pace of sponsored elements, the drive to include all you have gleaned and written during the course of the game, commercial breaks, waiting for the manager’s postgame comments, and cycling through full highlights, a beginner’s in-show mental state can properly be summed up this way: BLBLBLLBLBLBLFNNDKSKBLLDJFJSKKAAKLFJFGNDFNJSDKDFKKFKLDEIEIDSKDDF.

Afterwards, breathe. Thank Herb Lawrence and Dave Miska for their awesomeness. Gather your things. Text your wife that you’re headed towards transportation. Walk quietly, solitarily, down the hall and the stairs, emerging to an impossibly quiet and barren upper concourse. The stillness is beautiful. Pause and mindfully try to take it in. Walk down the ramps, or lazily use the elevator. Exit the ballpark and dart skillfully through drunks, cops, and traffic like a slow motion Devin Hester. On your way home, dissect the job you’ve done, making sure to re-frame mistakes that elicited shame as teachable moments that will make you better. Breathe some more. Call your wife, if she responded to the earlier text. If she’s managed to fall asleep without you, don’t dare disturb her.

That calm assurance you portrayed fades away, and you try to let the exuberant gratitude fill the void, laughingly dismissing the useless doubt.

Do it again, better, tomorrow. Let yourself dream about just how good it could be.