On “I Can’t Breathe” t-shirts, Derrick Rose, and Misplacxed Anger 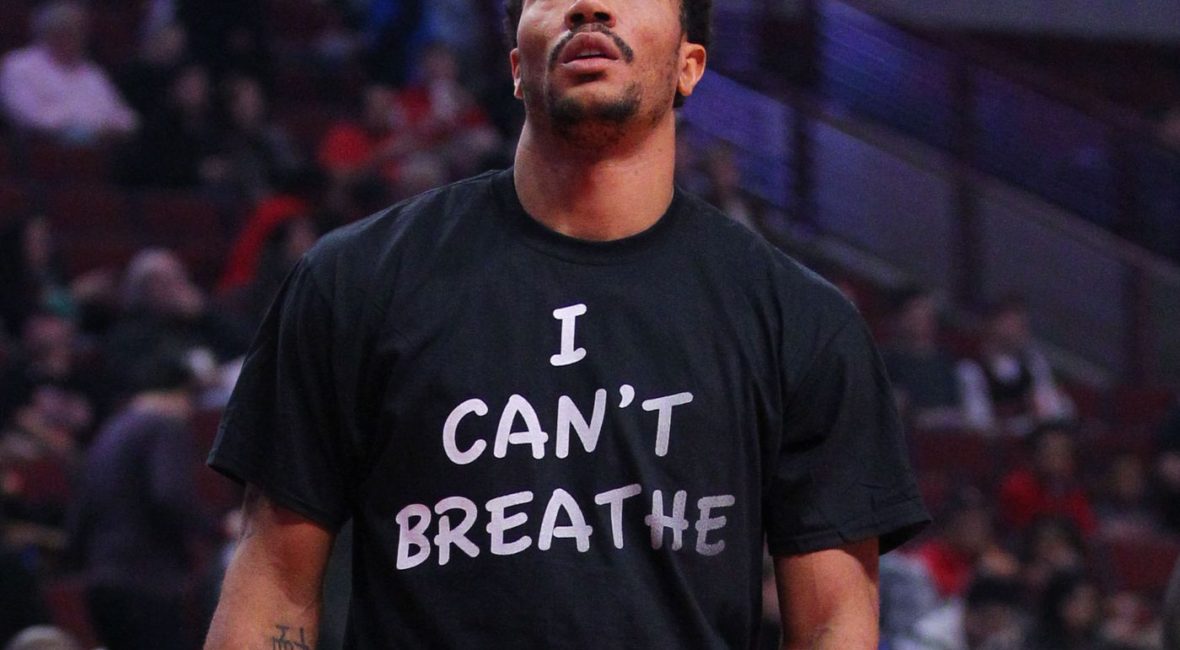 I don’t set out aiming to be political on sports radio….we’re your distraction from some truly awful things. We’re the funny papers. But sometimes the issues of the greater world come to us.
Remove yourself from whether you believe Eric Garner’s killer should stand trial, or not. Seriously, take a minute and lose the partisan side, any racial side.
This country was founded on the strength of protests, standing up for fairness. This country was started with a revolution. Starting with the disenfranchised British settlers, minorities of all kinds have since had to stand up for fairness for the last several hundred years. Your lives would not be as free nor as rich as they are today, were it not for protests. And for civil disobedience.
Protesters should write their congressmen, their aldermen, they should post blogs, and more.
And, as long as they don’t turn it into mindless looting or criminal activity, they should march, and scream, and stop traffic to get the nation’s attention. Make a unified, country-wide stand if the energy to do so is there.
And, if an athlete wants to show his support for a cause, he should be applauded for it. Stand for something bigger than yourself. Noah has the commercial about gun control; “what do you stand for?”
Derrick has done and said some really bad, ill-advised things in recent months and years. Neglecting to mention championships as he talked about meetings and graduations was a mistake, then doubling down on it when given a chance to clarify was just awful. Then he tripled down and said he could care less. Bad PR, stupid statements, and selfish, sloppy thoughts.
So he’s done and said some stupid things. This wasn’t one of them.
WHAT ARE YOU MAD ABOUT, IF YOU’RE MAD?
Derrick in general these days? Dumb comments past? Separate things.
Derrick has always been active in talking about, raising money for, and helping in inner city neighborhoods. This is not some new, politically correct issue he doesn’t understand. This is not something he doesn’t understand….he knows it first hand. He has talked about inner city violence, blaming his culture, blaming the city’s structure, not just blaming cops. He’s donated a million dollars to an after school charity trying to keep kids off the streets and a life of crime. He did that 2 months ago.
So much has been discussed about how the goal of his life was to escape his neighborhood, and how he has never lost that connection to and with his struggle. That connection has been cited as a detriment for all sorts of things. And now some of the same people who have written about that connection being a problem are saying that he’s coming from a place of ignorance on it? Shameful.
He doesn’t need to explain what that represented. What wearing that shirt meant. It’s all around you. You watch the video? You see a frustrated man, living a hard life, who’s not going to take it anymore. He can’t face yet another arrest for a very minor crime—selling “loosies,” cigarettes without tax stamps. Mayor Bloomberg has made cops go after stuff like this relentlessly.
You see a dude dying, in an illegal chokehold, begging for his life and his breath? You see him lying there unattended for several minutes before the EMT’s arrived. He died because he could not breathe.
And you need to know what Derrick meant by the t-shirt? It might mean you just don’t want to hear it.

« Previous post
Backstage with Cubs and Eddie Vedder at Hot Stove, Cool Music 2016
Next post »
Engaged amidst the Holidays, but on no one’s terms but ours.